- The dream was to create a great public place for dance at Råslätt. That became our vision.

Says Katarina Bonnevier, one of the members of the Arts and Architecture group MYCKET. She has been involved in creating a creative and playful proposal resulting in a large illuminated cap, in the middle of the neighbourhood, where people move between the grocery store, the library and the community youth centre. A new outdoor environment, where girls are encouraged to take more space, has been created where our lighting designers Ida Raymondson and Linda Tollin contributed with innovative and eye-catching lighting.

Råslätt is a neighbourhood in the southern Jönköping where diversity thrives. The area has a lively community and there are several places outdoors for different sports activities. Through a collaboration between Vätterhem and Jönköping Municipality, the Swedish Arts Council was able to bring MYCKET together with Mix Dancers Academy, a dance school that has existed since the beginning of the 2000s. The dance group had its former premises in the basement of the common youth centre.

- We wanted to create something that would be an eye-catcher in the area, and that would be associated with Råslätt, says Katarina. The fact that the dance venue took the form of a cap was an idea the dance group themselves encouraged and thought was a fun idea. We looked at what the group had as visible attributes and came up with several suggestions but landed in the modern and flat 59fifty cap - a tough, ground style. It would have been fun if the talk of the town would be like "See you at the cap"!

The general opinion was that there was a lack of activities for girls in the evening at Råslätt, which hopefully would change now. Regarding the lighting, MYCKET wanted to find a local connection in the Jönköping region to the project. They contacted our lighting designer Ida Raymondson at Hide-a-lite and discussed good functional lights for the outdoor scene.

We had three criteria on the lighting:

a) It should be well illuminated for dance training explicit! A general light that neither disturbed nor caused glare.

b) The light would help make the cap visible, preferable as the shape of a cap at night.

c) The space should be illuminated to create a welcoming feeling to everyone. Pavilions in parks that lack lighting can become gloomy and thus feel inhospitable.

An outdoor scene in the shape of a dance cap, reminding of a cosy courtyard with many different colours in the neighbourhood of Råslätt in Jönköping. The stage was built to strengthen the public space for girls and has a creative light solution with lighting from us at Hide-a-lite. 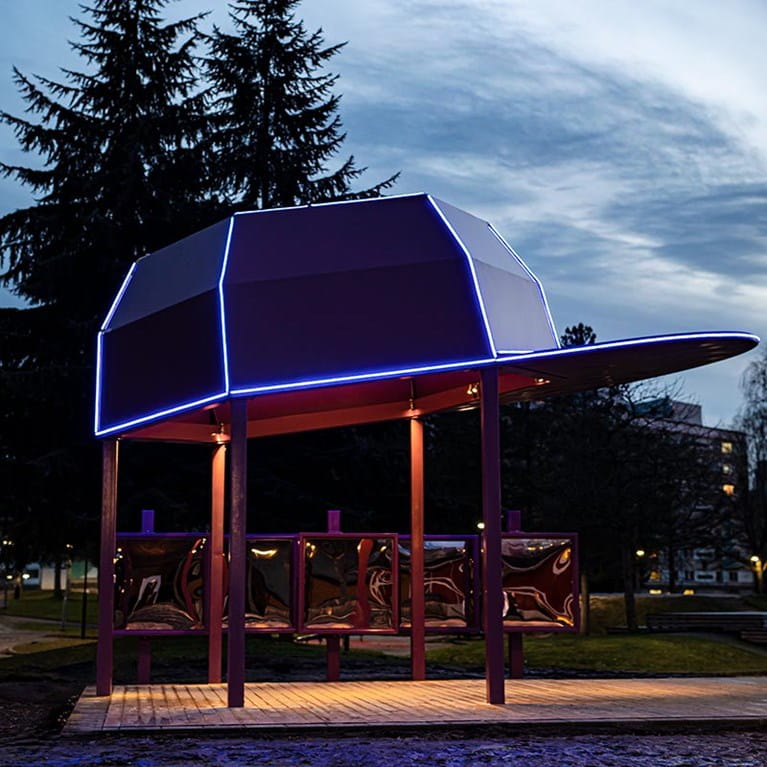 Floodlight Spot It Multi 3 is mounted at several places inside the cap and is illuminating the stage and the poles.

Inside the cap, a Moon Public Round is placed, providing a wide general lighting and illuminates the scene – a perfect complement to the dance venue’s floodlighting. 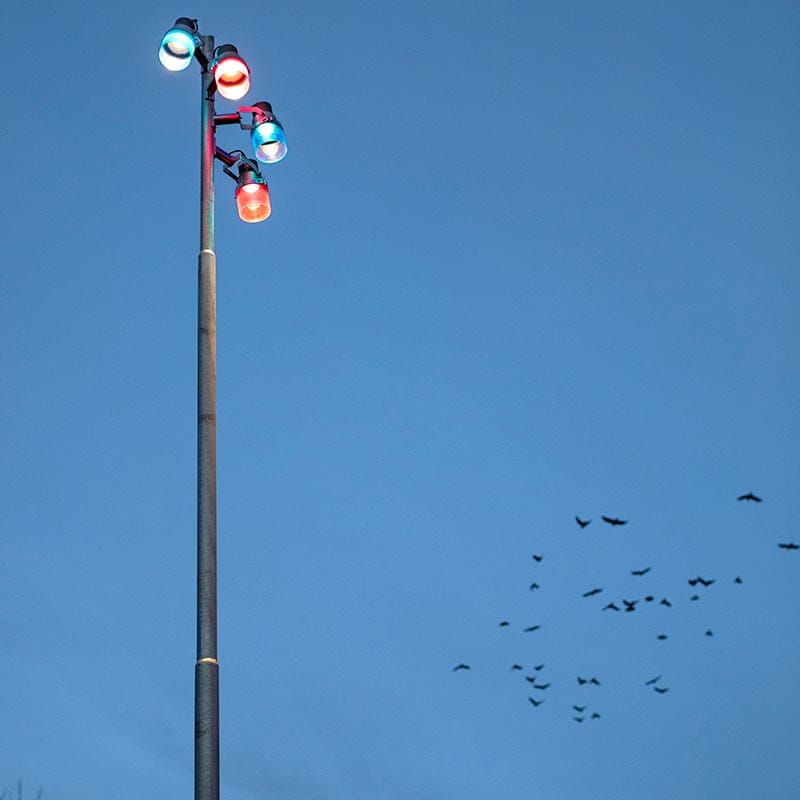 Eye-catching poles that stands out.

MORE INFO ABOUT THE PRODUCT

MORE INFO ABOUT THE PRODUCT

The stage in the shape of a cap was illuminated at the edges with LEDstrip Neon Top in RGB to highlight the shape and become a colourful effect in the evenings. Inside the cap, luminaires were placed as stage lighting consisting of several floodlights Spot It Multi 3. The luminaires also had to illuminate the poles that hold up the cap. As a complement to the floodlight, a ceiling light, Moon Public Round, was placed in the middle of the top of the cap to provide a broad general light that simultaneously blurs out some of the contrasts from Spot It Multi 3.

Anyone can connect their phone via Bluetooth to the audio system in the cap to choose their favourite song to dance to. LEDstrip Neon's RGB light is controlled from the common youth centre’s premises, which in the evening provides the light of a "skeleton cap".

- A fun thing about the project now when ready, is that people stop and dance to the music completely spontaneously, Katarina continues. It’s like the cap makes you want to giggle. It is inviting and looks good. Spot on!

Next to the stage, two eight-metre-high poles were placed to create a cosy "courtyard feeling". Ida contacted the lighting designer Erik Olsson (Olsson & Linder) who produced covers in various colours, including the pole brackets for the lighting. The covers became a nice colourful touch on the poles during daytime, while they shine white and bright in the evenings. They are specially adapted to the Spot It Multi 26 luminaire, which is available in two different beam angles, 26 ° and 40 °. The pole brackets were simple accessories that facilitated installation. In summary, a playful and eye-catching lighting installation that helped make the area at Råslätt stand out even more.
-We are very pleased with the result, says Katarina. The cap is visible. We have only received positive reactions and see this as part of a greater commitment - to activate places and environments where people move and to create community.

Finally, there is a spot in the limelight, outside the basement walls, where dance, music and general hang outs can take place - a creative area where the girls can take more space. 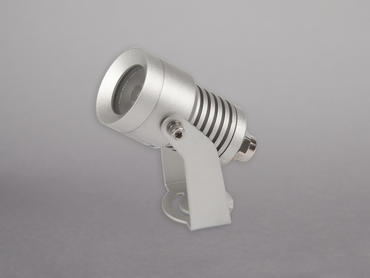